Have you heard the horror stories about Rimadyl and it’s potentially fatal side effects?

If so, you’re most likely looking for some kind of alternative to help your dog deal with pain and inflammation.

In this article, I take a closer look at Rimadyl, whether it’s safe, and suggest a natural alternative that’s just as effective and 100% non-toxic even in the highest doses.

Rimadyl is the brand name of a type of non-steroidal anti-inflammatory drug known generically as carprofen.

Vets will usually prescribe Rimadyl to dogs dealing with pain associated with arthritis or surgery.

However, it can also be used to treat chronic pain more generally.

Rimadyl works in similar ways to aspirin and inhibits specific enzymes known as COX-1 and COX-2.

Both of these enzymes play a key role in the inflammatory process:

COX-2, for example, is created at sites of inflammation and helps create a group of fatty compounds known as prostaglandins.

These prostaglandins are involved in mediating inflammation and fever.

Is Rimadyl Safe for Dogs?

This is an important question for a lot of pet owners.

Many sources will tell you that Rimadyl is a safe and well-tolerated medicine.

However, there’s also no shortage of horror stories around the internet of pets who had serious, sometimes fatal, reactions to Rimadyl.

So, what’s the verdict? Is Rimadyl safe for dogs?

Rimadyl is definitely a very effective treatment for arthritis and post-surgical pain and is generally well-tolerated.

It’s also one of the best-selling pet medications on the market.

However, Rimadyl is far from harmless.

Depending on the severity of these side effects, Rimadyl might not always be a feasible treatment option for your dog, especially if they suffer from a chronic condition like arthritis.

It’s also really important to realize that not all dogs respond to Rimadyl in the same way.

Some dogs might be able to tolerate the drug really well with minimal side effects.

Others, however, might have a severe adverse reaction to the drug.

Below I’ll take a closer look at the adverse effects of Rimadyl for dogs, as well as give you some tips on what to consider before deciding to use this drug with your pet.

Rimadyl, like other NSAIDs, can have a variety of mild side effects.

Rimadyl can also have more serious side effects, including:

You’re probably reading this and wondering:

“How did a drug with such severe side effects become a best-selling pet medication?”

Well, an article in Dog’s Naturally Magazine puts it like this:

Most dogs do well on Rimadyl, except the ones that don’t.

And that’s exactly it:

For some dogs, Rimadyl can offer fast, effective relief from pain and inflammation and genuinely improve their quality of life.

For others, it can prove fatal.

When Rimadyl first hit the market, it was extremely well-marketed both to pet owners and vets.

Today, most of those slick commercials are gone.

In the article I mentioned above, which first appeared in The Wall Street Journal, reporter Chris Adams goes over countless case studies of pets who had sudden, fatal reactions to Rimadyl.

Dog’s like Montana, for example, who first seemed to be doing well on Rimadyl.

Soon she couldn’t walk, starting having seizures, and was ultimately put down.

An autopsy of her liver showed she had a severe reaction to Rimadyl that caused fatal liver damage.

Adams also shows that the company that makes Rimadyl tried to “compensate” some of the owners of these pets.

He also showed that the company was forced to quit its ad campaigns because it refused to list “death” as a possible side effect of the drug.

Despite all this, Rimadyl is still on the market and prescribed regularly.

According to the US Food and Drug Administration, it deserves to be on the market because it can be very effective.

Vets, however, need to act with precaution when prescribing it.

Today, most people will tell you that the percentage of pets that react badly to Rimadyl is small (somewhere around 1%, apparently).

However, keep in mind that these are really just estimates.

Most pets aren’t biopsied after they die, meaning the exact cause of their death isn’t always clear.

Plus, most of the dogs using Rimadyl are old, meaning they could potentially have died from other causes.

Tips Before Using Rimadyl With Your Dog

If your pet suffers from chronic inflammatory pain and your vet suggests Rimadyl, keep the following things in mind before you decide to go ahead with the treatment.

1. Rimadyl (or other NSAIDs) should not be your first choice for treating arthritis and pain in your dog.

There are a lot of alternatives you should try before Rimadyl.

Some natural alternatives include:

Dasuquin, a supplement which contains glucosamine, chondroitin, MSM, and essential compounds from avocado and soybean. Together, it serves as a comprehensive supplement designed to help protect your pet’s joints.

Free Form, a concentrated omega-3 supplement available in capsule and liquid form. It contains a potent mix of omega-3 fatty acids which are believed to help reduce inflammation, swelling, and pain. The capsules should be taken orally, while Free Form gel is designed to be used topically.

Other, safer alternatives to Rimadyl include prescription medications like Adequan injections or Tramadol.

2. Don’t use multiple anti-inflammatories together.

Whatever medication or supplement you choose to use with your dog, make sure to try it on its own first.

Many medications can interact with each other in negative ways and possibly have harmful side effects.

Plus, using multiple medications/supplements makes it hard to see what works for your pet and what doesn’t.

So, stick to one treatment plan, try it, and move on if you find it isn’t effective.

3. Test your dog before and during treatment.

Before you start a new treatment plan with your dog, make sure to give them a blood test.

Then, schedule regular tests during their treatment, too.

This will help you and your vet have a clear idea of how your dog is responding to the treatment.

Note that this is more important with medications than natural supplements (like glucosamine etc), as the latter usually don’t produce any serious side effects.

The 4 Best Rimadyl Alternative for Dogs 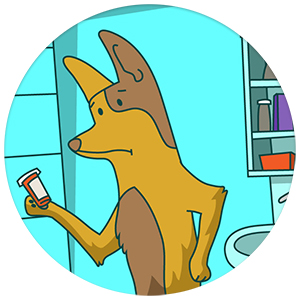 Here’s a list of some popular alternatives to Rimadyl:

I’ve looked at all of these supplements in more detail in my recent article on the best natural anti-inflammatories for dogs.

While they are all popular, they aren’t always effective.

Yucca is a plant found in South and Central America and studies suggest it has anti-inflammatory properties.

It is known to be as effective as some other medications, however it’s also known to have some side effects. It’s best to use this for short-term treatments. For this reason, it’s not my top recommendation.

Glucosamine supplements are very popular for pets and for humans.

If your dog has joint issues, then it’s certainly a supplement to consider, as this is what it’s best known for.

But as you dig deep into the research behind glucosamine, you’ll end up finding some conflicting information.

Bottom line: It might not be as great as everyone says it is.

That being said, people do report good results for themselves and their pets, and it ticks the boxes for natural and safe. I’ve created a full glucosamine for dogs report that you can review here.

Fish oil is probably even more popular than glucosamine.

Chances are you have some in your own medicine cabinet.

Because of its popularity within the health and wellness industry, people have been giving their dogs fish oil for pain and inflammation.

But in recent years, the news surrounding fish oil hasn’t been all that good. The effectiveness has been questioned, and many leaders in the pet industry have warned us about the harmful effects of low quality supplements. So it’s probably not your best choice for replacing Rimadyl.

I have also explored fish oil for dogs in more detail which you can review here.

This is by far the #1 alternative to Rimadyl and other NSAIDs.

You’ve probably already heard a bit about the health benefits of cannabidiol (CBD).

But did you know that it is one of the best anti-inflammatories found in nature?

In fact, some studies show that CBD is more effective than regular human NSAIDs like ibuprofen and even prescription painkillers.

In a video for TriOasis Wellness Centers, Medical Director Dr. Phillip Blair explains that CBD can help with the inflammatory process in 2 main ways.

First and foremost, he says that CBD can have direct analgesic effects in sites of the body affected by inflammation.

Secondly, Dr. Blair explains that CBD can interfere with the production of cytokines, which are small compounds involved in up or down-regulating inflammation around the body.

Cytokines play a key role in many of the symptoms of inflammation, including pain, swelling, and even reducing the number of antibodies and immune cells present in the inflammatory site.

The science on how CBD offers pain relief and anti-inflammatory effects is very complex, and scientists still don’t completely understand how CBD is processed in the body and the effects it can produce.

A solid body of research, however, shows that CBD can help reduce the pain and inflammation of a variety of different conditions.

These include arthritis, gastrointestinal conditions (like IBD, gastritis, and more) and even dermatitis and other skin conditions.

Best of all, CBD is 100% safe and non-toxic, even in extremely high doses.

To learn more, check out my CBD safety page here..

If your dog suffers from arthritis and joint issues, make sure to check out my article on CBD for dogs with joint issues for suggestions on particular CBD products you can use to help your dog manage these conditions.

For more information on the health benefits of CBD for dogs, check out my CBD benefits page and blog.