Does your dog get seizures or suffer from epilepsy?

If so, you’ve likely heard about phenobarbital, the most common prescription anticonvulsant prescribed for dogs.

In this article, I take a close look at phenobarbital, how it works, and it’s side effects (some of which are quite serious).

Plus, I’ll also look at CBD, a natural anticonvulsant with no side effects, and how it can work as an effective alternative to phenobarbital and other prescription epilepsy meds. 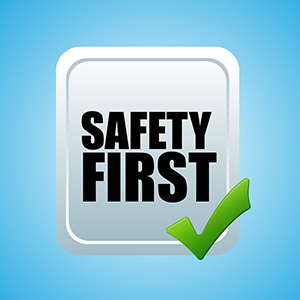 Phenobarbital is one of the most commonly prescribed drugs for dogs with seizures.

It works by calming neuronal activity in the brain, which can help treat an acute seizure as well as prevent seizures in the future.

Phenobarbital is also used to treat seizures in young children, as well as to treat sleep issues, anxiety, and aid in drug withdrawal therapy.

One of the reasons phenobarbital is so popular in the veterinary world is because it is generally safe and well-tolerated.

While it does produce some side effects, which I’ll look at in more detail below, they are usually mild and tend to disappear after a few weeks of treatment.

In a small percentage of dogs, however, phenobarbital can cause serious adverse effects.

Phenobarbital is most commonly administered in tablet form but can also be injected intravenously or into a muscle.

Note: Phenobarbital is not FDA approved for use in animals.

How Does Phenobarbital Work in Dogs?

To better understand how it works, it helps to first define what a seizure is.

In its most basic sense, a seizure is generally caused by a misfiring of the neurons in the brain.

These neurons send electrical signals around the brain, spinal cord, muscles, and nerves in the body.

The information they send controls all kinds of aspects of our body, especially movement.

When a dog suffers from a seizure, the neurons in their brain fire together rapidly in an uncontrolled manner.

This sends all kinds of mixed signals around the body and, ultimately, causes the symptoms which, collectively, we recognize as a seizure.

While we tend to associate seizures with epilepsy, they can also be caused by a number of other factors, including:

Epilepsy, on the other hand, is characterized by recurring seizures.

Phenobarbital can help prevent the recurrence of seizures as well as treat a seizure in progress.

It’s important to note, however, that as a nonselective central nervous depressant drug, phenobarbital doesn’t target the individual neurons affected during a seizure.

While phenobarbital is generally safe and well tolerated, it can produce side effects.

The most common side effects of Phenobarbital in dogs are:

These symptoms tend to last a few weeks, then wear off further into the treatment.

Phenobarbital Can Cause Liver Problems 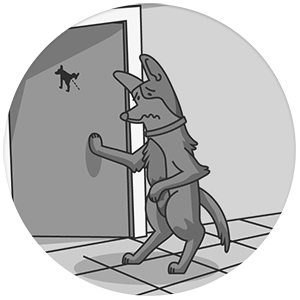 Make sure to take this up with your vet:

While it’s less common, phenobarbital can cause serious liver problems in some dogs.

Studies have shown that many dogs undergoing phenobarbital treatment show an increase in certain liver enzymes.

In most cases, this isn’t anything to worry about.

However, in a small percentage of dogs, phenobarbital treatment can end up causing serious liver damage.

This, in turn, can cause acute liver disease which can have very serious outcomes.

If your dog already suffers from liver problems, I don’t recommend treating them with phenobarbital.

If your dog has a healthy liver and you’re considering treating them with phenobarbital, make sure you work with your vet to keep an eye on how your pet responds to the treatment.

Also, remember to pay special attention to their liver.

Your vet will know how to do this, just make sure to do your part by taking your dog for regular check-ups and keeping your vet informed about their diet, lifestyle, and any supplements/meds he/she is taking.

There are a number of signs you can look out for to help you catch liver disease early, minimize its impact, and treat it accordingly.

Phenobarbital Can Cause Anemia

In extremely rare cases, phenobarbital has been found to cause anemia, a condition characterized by a lack of red blood cells in the blood.

Again, this is extremely rare.

Nonetheless, make sure you keep an eye on your dog over the first few weeks of treatment.

If you note any side effects, mention them to your vet immediately.

Some phenobarbital side effects may eventually subside once your pet has adjusted to the medication.

However, some phenobarbital side effects, as we saw, can be really serious and need to be detected early.

Phenobarbital Can Interact With Other Drugs

Phenobarbital can interact with other drugs in a number of ways.

Some drugs may interact with phenobarbital in a way that leaves it less effective.

On the other hand, some drugs can interact with phenobarbital and intensify its effects.

Some other drugs that might interact with phenobarbital include:

If your dog is taking any of these drugs, make sure you discuss that with your vet before using phenobarbital.

Did You Know That There’s a Natural, Safe Alternative to Phenobarbital?

After reading about all the different adverse effects of phenobarbital, you’re probably eager to avoid using the drug if possible.

And I don’t blame you.

With my dogs, I always try to look for safe, natural alternatives before starting them on a prescription drug treatment.

Luckily, if your pet suffers from seizures and/or epilepsy, there’s a natural, safe supplement you can try that could prove extremely effective.

That supplement is CBD.

Chances are you’ve already heard something this.

Below I’ll take a closer look at CBD, what it is, and how it works to prevent seizures in dogs. 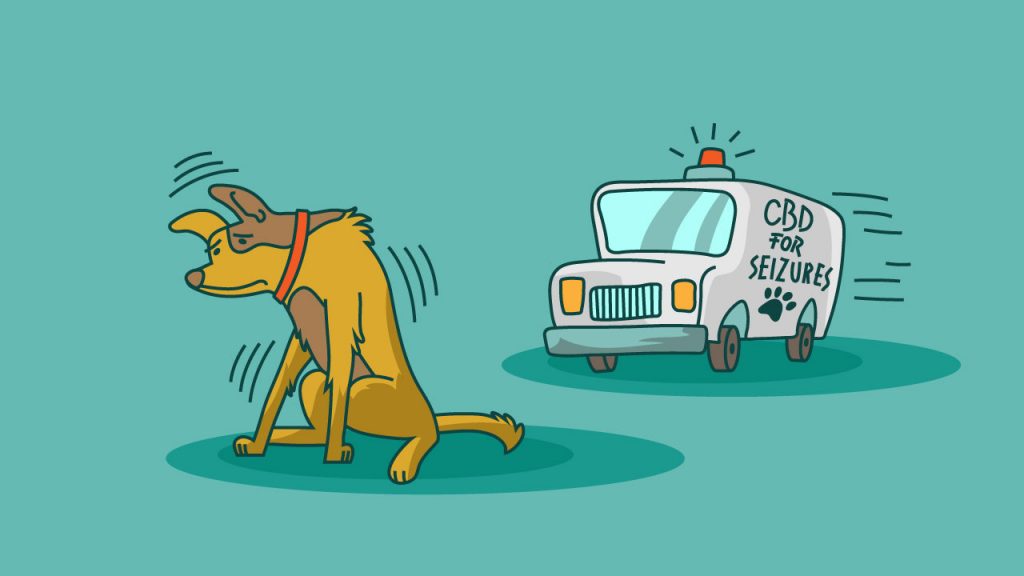 CBD, as you probably know, is a compound found in hemp.

It’s non-psychoactive, meaning it won’t get your pet “high” or cause that euphoria and sedation we associate with cannabis.

Those effects are caused by THC, another cannabinoid found in cannabis (cannabis plants bred specifically for their psychoactive effects).

Hemp, on the other hand, is an industrial plant that contains very low concentrations of THC (not enough to cause psychoactive effects).

When it enters the body, CBD interacts with cannabinoid receptors which make up the Endocannabinoid System.

This system occurs naturally in all mammals and is made to process endocannabinoids like anandamide and 2-AG.

THC, the psychoactive chemical in cannabis, is structurally very similar to anandamide (sometimes called the human “bliss molecule”) and can fit into the same receptors.

But CBD works a little differently:

Unlike THC, it doesn’t actually fit into cannabinoid receptors.

Instead, CBD modulates other receptors and channels within the Endocannabinoid System.

For example, CBD can delay the uptake of compounds like anandamide, activate serotonin receptors (most notably 5-HT1A), and much more.

In doing so, CBD can provide a vast variety of health benefits, including seizure relief. 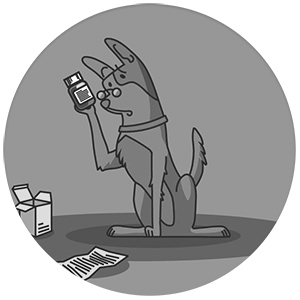 At the beginning of this article, I described a seizure as a rapid firing of the neurons in the brain.

By depressing the activity of the entire central nervous system, phenobarbital helps calm down this misfiring, which can work both to treat seizures the moment they’re happening and prevent them in the future.

CBD seems to do something similar, although the science behind how it works still isn’t exactly clear.

So far, scientists have seen CBD act on various parts of the brain, including calcium and sodium ion channels, glutamate receptors, and more.

In doing so, CBD is believed to act on the neurons and neurotransmitters that misfunction during a seizure.

Similar to other anticonvulsants, CBD seems to be able to calm the rapid misfiring and electrical mess that happens in the brain during a seizure.

For more information on some of the studies on CBD and its effect on seizures, check out this article on CBD for dogs with epilepsy.

Probably one of the biggest advantages CBD has over other prescription anticonvulsants is this: 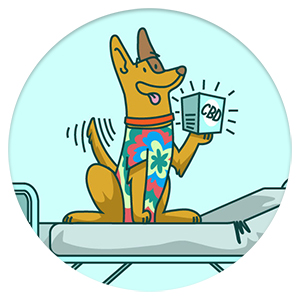 In fact, the only side effect I’ve heard from pet owners using CBD with their animals is some slight drowsiness.

This is because, in higher doses, CBD can have some sedative effects, which is why it is sometimes used to help with sleep and pain management.

Luckily, you can easily avoid these effects by keeping a close eye on your dog’s dose.

For more information about the side effects of CBD, check out my CBD safety page here.

Plus, for a more detailed guide on dosing, check out my CBD dosage page for dogs.

Learn More About the Health Benefits of CBD Today

Ever since I discovered CBD, it’s the first thing I turn to when my dogs get sick.

In fact, I even use it as a daily supplement for my dogs to help boost their health and prevent them from getting sick in the future.

That’s because, besides helping with seizures, CBD has a plethora of other health benefits.

It can reduce inflammation and pain, anxiety, and much more.

If your dog suffers from epilepsy and seizures, I highly recommend giving CBD a try before turning to prescription medications like phenobarbital.

If your dog is already taking a prescription anticonvulsant, talk to your vet about using CBD.

You might be able to replace their prescription with this natural supplement instead.

If you’re ready to try CBD to help your dog with seizures, I highly recommend trying HolistaPet’s CBD Pet Tincture.

Simply choose the size of bottle which is appropriate for the weight of your dog.

HolistaPet is one of my top recommendations for dogs with seizures, so I recommend you give it a try.

For more reviews of specific CBD pet products, check out my homepage.

If you want to learn more about CBD or are still unsure about whether your pet needs it, download my free CBD checklist here.

It covers all the benefits of CBD and includes a free 35-page, printable report on everything you need to know about using CBD with your pet.

You can fill out the form below to get instant access: