Does your dog suffer from Cushing’s?

If so, you’re probably looking for a safe and affordable alternative to the standard meds used to treat this condition.

In this article I’ll show you how CBD may help regulate hormone imbalances and what that means for dogs with endocrine problems like Cushing’s disease. 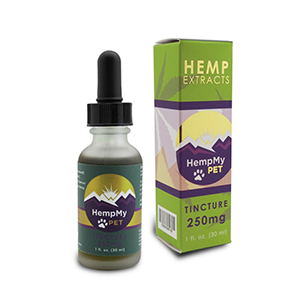 I recommend CBD oil by HempMy Pet as one of the best options for sick dogs. Their products have amazing ingredients and the brand is very trustworthy.

Free Gift: Download a free checklist which reveals if your dog will benefit from using CBD. If you're unsure about this supplement, this checklist will help you decide if it's right for your dog. Click here to download.

A Quick Overview of Cushing’s Syndrome

Review the Causes of This Disease

What are the Common Symptoms in Dogs?

What are Some Treatment Options?

– Link Between the Endocannabinoid and Endocrine Systems

– Regulating Hormone Levels With the ECS

Are Other Pet Owners Treating Their Dogs With CBD?

Where to Order CBD Online 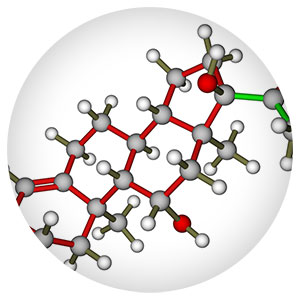 Cushing’s disease is an endocrine disorder characterized by excess cortisol levels in the blood.

Cortisol is a stress hormone which our body usually produces in response to stressful situations.

In excess levels, however, cortisol can cause severe muscle, skin, and bone breakdown.

I’ll cover the individual symptoms in dogs in more detail below.

For now, to better understand how this disease works, let’s first take a look at how the body normally produces and regulates cortisol.

Understanding Stress and it’s Effects on the Body

You look to your side to find a car come to a screeching halt only a few meters from where you’re standing.

We can all agree that this is a pretty scary and stressful situation that’ll rapidly get your heart racing and flick on your “fight or flight” mode.

Your dog might have a similar reaction on a walk if he suddenly finds himself confronted by another dog, for example.

But what actually goes on in the body in these kinds of situations?

Well, it all starts in the hypothalamus, a small part of the brain that plays a crucial role in hormone production.

ACTH travels to the adrenal glands (located just above the kidneys), where it reacts with specific cells within the gland and stimulates the production of cortisol.

Cortisol is a steroid hormone which, in times of stress, ensures our bodies have the energy available to react quickly to our surroundings.

It does this by increasing the synthesis of new glucose molecules, as well as the breakdown of fat and protein for energy.

Cortisol is also involved in managing our circadian rhythm, its levels peak in the morning when we need to get up and go, then decrease during the day and are at their lowest at night when it’s time to sleep.

Together with epinephrine, cortisol helps trigger a wide variety of responses in the body that help us react and cope with stress in our lives. 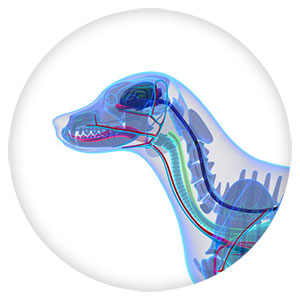 Cortisol serves the same purpose in your dog’s body:

It serves as a fight or flight hormone that helps trigger a wide variety of physiological responses that help your dog respond quickly to an external stressor.

It’s essentially what gives your pup's body the energy to run away from an aggressor, or stand and face confrontation if need be.

However, the key to this system working properly is regulation.

High levels of cortisol in the blood tell the hypothalamus and pituitary gland to slow down their production of CRH and ACTH.

This, in turn, slows down the release of cortisol from the adrenal glands.

In people with Cushing’s disease, the body loses its ability to properly regulate these hormone levels.

There can be numerous causes.

In fact, there are many different types of Cushing’s with various causes and effects.

Typically the zona fasciculata (the middle layer of your pet’s adrenal gland) produces too many glucocorticoids.

There are also 2 types of atypical disease:

The first is caused by the outer layer of the adrenal gland, the zona glomerulosa, producing too much aldosterone, a hormone that helps balance electrolyte levels.

The second kind of atypical disease is caused by the overproduction of sex hormones such as estrogen, testosterone precursors, or progesterone in the innermost layer of the adrenal gland, known as the zona reticularis.

Some possible causes of this disease include:

This is is when the pituitary gland produces too much ACTH, hence overstimulating the production of cortisol in the adrenal glands.

The remaining 15% of cases are caused by adrenal gland tumors.

What are the Symptoms of Cushing’s in Dogs?

Cortisol is a diverse hormone, hence this disease also produces many diverse symptoms.

Because these symptoms are so diverse, it can be hard to pinpoint them to Cushing’s disease.

The fact that most dogs with this issue only tend to have 2 or 3 symptoms, also makes it quite difficult to diagnose.

The most common symptoms vets see is increased thirst and urination, which sometimes includes soiling the house.

Increased panting is also common, as is weight gain (even if your pet is taking in fewer calories).

Unfortunately, this is an easy disease to miss and usually needs a 2 or 3-part blood test to properly diagnose the syndrome.

In the long term, the constantly high levels of cortisol in your dog’s body will make them prone to other serious health conditions like diabetes as well as infections.

Cortisol is also immunosuppressive, meaning it can affect the proper functioning of your pet’s immune system.

In fact, this is one of the main reasons dogs end up at the vet: The immunosuppressive effects of Cushing’s might leave them with an infection that they simply can’t get rid of.

Cortisol can also increase blood pressure, and chronic cortisol release from Cushing’s can put your dog at a higher risk of cardiovascular problems.

Because cortisol triggers the release of glucose, pets with Cushing’s may be constantly hungry, leading to overeating and, in turn, metabolic problems.

How is Cushing’s Normally Treated?

Most of the time it is diagnosed when a dog already has full-blown Cushing’s disease, at which stage it is irreversible and incurable.

The medications available for treatment are very expensive and cause serious side effects.

According to Dr. Karen Becker, an integrative wellness veterinarian, the side effects of Cushing’s medications are oftentimes worse than the symptoms of the disease itself.

If you do use these medications, your pet will also need to undergo a lot of blood work throughout the rest of their life to ensure that the medications are being managed properly. 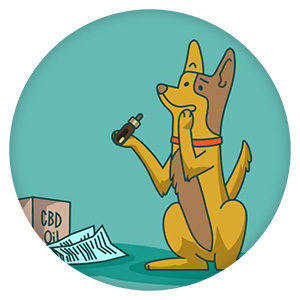 If you’re reading this, I’m sure you’ve heard about the hype behind CBD oil.

Cannabidiol has taken the health industry by storm, promising a plethora of health benefits that can help deal with everything from pain and inflammation to epilepsy.

But what about Cushing’s disease?

Could CBD help relieve the symptoms of this complicated condition?

Unfortunately, there’s only a very limited body of research into the link between the endocannabinoid system and endocrine health.

Below I’ll explore some of this research and what it means for pet owners wondering whether to use CBD to treat Cushing’s disease in their dogs.

The Link Between the Endocannabinoid and Endocrine Systems

The endocannabinoid system, as I’m sure you know, is the system that regulates the effects of cannabinoids like CBD and THC. Read my report on it here.

As you may have read in some of my other posts, the endocannabinoid system is made up of receptor cells (namely CB1 and CB2 receptors), endocannabinoids (anandamide and 2-AG), and the enzymes that break them down.

There are other molecular pathways that can actually stimulate the ECS indirectly, but the main components of the system are these cannabinoids and their receptors.

Research has shown that cannabinoid receptors are found throughout the endocrine system, including the hypothalamus and the pituitary gland.

Activating these receptors has been shown to have clear effects on our sleep cycles, stress levels, and even metabolism.

In fact, the endocannabinoid system has even been shown to influence hormone levels and regulate our stress responses.

Studies have shown that CBD can directly affect the secretion of cortisol.

In 1993, the Brazilian Journal of Medical and Biological Research tested the effects of CBD on prolactin, growth hormone, and cortisol blood levels versus placebo.

The trial included 11 patients, and was double-blind and held over 2 sessions spread at least 1 week apart.

While the study noted that neither prolactin nor growth hormone levels changed after either supplement, CBD did have a noticeable effect on cortisol levels.

CBD is also believed to increase melatonin levels when taken at night.

It is believed to do so by activating specific cells in the pineal gland, the part of the brain which produces melatonin in order to regulate our natural body clock.

This is why CBD is often used by people with sleep issues.

By activating receptors in the pancreas, CBD is also believed to affect insulin levels.

You can learn more about this in my article on CBD for dogs with diabetes.

How CBD Can Reduce Symptoms of Stress

Research also shows that CBD can have a clear effect on stress.

We know, for example, that CBD acts on 5-HT1a serotonin receptors.

When it does, it works similarly to some antidepressants in that it temporarily increases serotonin signaling in the brain.

Studies have also shown that CBD can increase the signaling of GABA, an inhibitory neurotransmitter, to produce calming and even sedative effects when taken in higher doses.

Research also shows that CBD can increase anandamide levels in the brain.

Anandamide is an endocannabinoid often referred to as the “bliss” molecule for its calming, feel-good effects.

You can read more about these effects on my articles on CBD for dogs with depression and anxiety.

So, what does this all mean for dogs with Cushing’s?

Well, the fact that endocannabinoid receptors are spread all throughout the endocrine system suggests that the ECS may hold ways for us to stimulate and down-regulate endocrine processes like the production of cortisol.

This could, at least in theory, help regulate the symptoms of this disease and their effects on an animal’s health.

As I mentioned earlier, there’s limited research into the possibility of using CBD to treat this issue.

However, some pet owner’s have decided to try it with their pets and are seeing promising results.

Gryphon, for example, is a 10-year-old Tibetan Mastiff who suffers from Cushing’s and severe arthritis.

His owners originally gave Gryphon CBD in order to help him deal with the pain and inflammation in his joints, seeing that he wasn’t able to take pain meds along with his Cushing’s medication.

Not only did the CBD help calm his joint problems, but Gryphon’s vet also reduced his Cushing’s medication by half.

You can read more about Gryphon and other CBD success stories on the testimonial pages of sites like Canna-Pet.

Where to Order CBD Products for Your Dog

If you think your dog has this disease, talk to your vet about CBD.

You may find that CBD can help regulate some of the hormone problems associated with Cushing’s and therefore help your pup cope with their symptoms.

On my website, you can find detailed reviews of individual CBD pet products as well as CBD pet brands.

Right now, one of my favorite recommendations is HolistaPet, which offers great deals on a variety of high-quality products, including CBD oils, capsules, and treats.

I would recommend HolistaPet's CBD Pet Tincture for treating this specific type of ailment, and to use as an overall general wellness supplement.

If you want a detailed overview of this brand, you can read my full review here.